Artisan Whimsy is currently hosting a challenge for members to show off their efficient use of studio space with a chance to win $50 in goodies and supplies. Hey this challenge was made for me since I try to pride myself in being an efficiency nut!

My tiny studio has 5' x 6' of walkable floor space with 2 work tables set up in an L shape and one rolling stool to move easily from one station to the other as needed. Here is my main work area on a good day.  I just installed the peg board along one wall last summer and painted it a deep shade of purple.  Just love it, and provides great contrast to the cream colored walls. I have found lots of unique little hanging gadgets at the local hardware store. My favorites are the 3 heavy duty magnets which you can see in this picture are holding my most commonly used pliers. They really come in handy when working on metal/wire projects. In the upper left corner you can also see a re purposed gift wooden wine box that holds thread and seed beads. 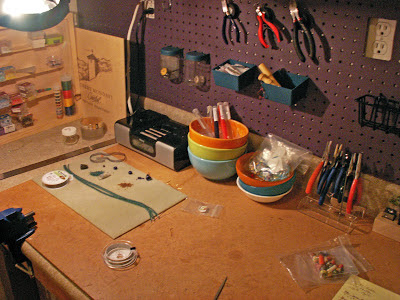 Here is the other side of my main work area where I have a cork board which I use mainly to post inspiration photos and keep track of work in process. Can you see the time sheet? -I use it to track my time and raw materials used for each project. 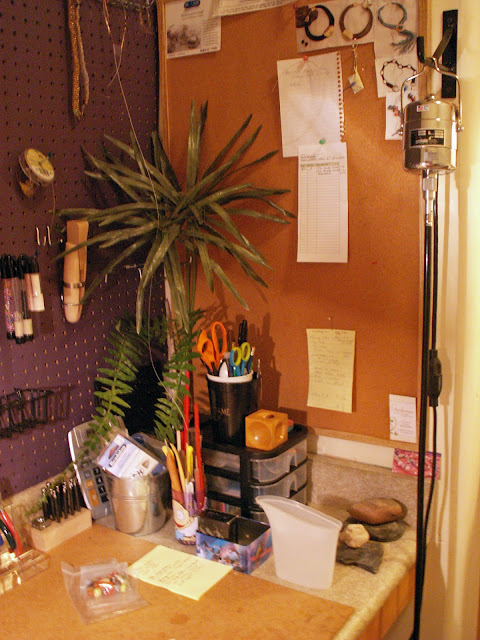 My second work area is the hot station with ventilation for small solder work and baking clay. There are shelves below the table to keep my paints, chemical supplies and clay oven out of the way. It would be nice to have everything out all at once but I simply do not have the space. I find working in a small area helps me to stay focused on completing one project at a time... 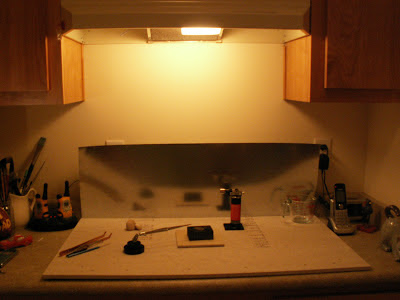 So what's your studio look like? The challenge is open through November 30th if you want to jump in. Also be sure to stop by and see all the other studios here.

Thank you Sue Beads for hosting today's blog hop for the 7000 Bracelets for Hope Charity. These two blue bracelets I made were donated to people or their caregivers who are dealing with rare genetic disorders.
This first glass bracelet was put together in crystal, blue and gold tones and features a sand dollar charm with adjustable gold clasp. The clasp and light blue polymer clay disc beads were made by me. 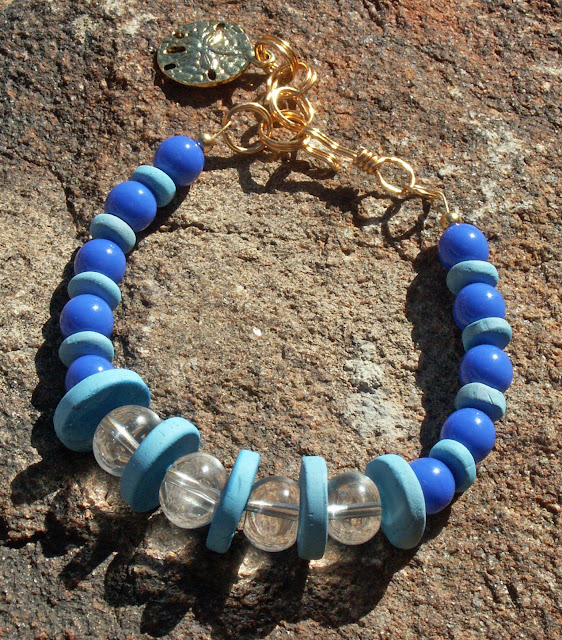 The second bracelet was done in blue, gold and dark copper tones using Czech glass beads I have been holding onto for something special. The little cat beads are my favorite. 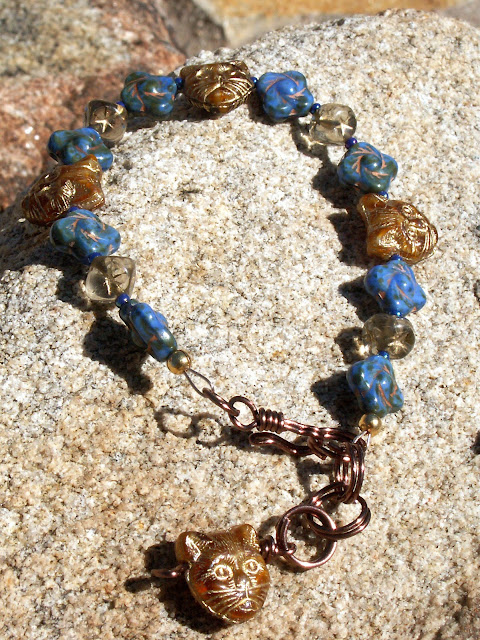 And now please follow the links below to see all the pretty blue bracelets donated for this very important cause:


KristiBasket - It's a New Day


Fabric of My Life


CianciBlue
Posted by LisaS at 5:00 AM 8 comments: 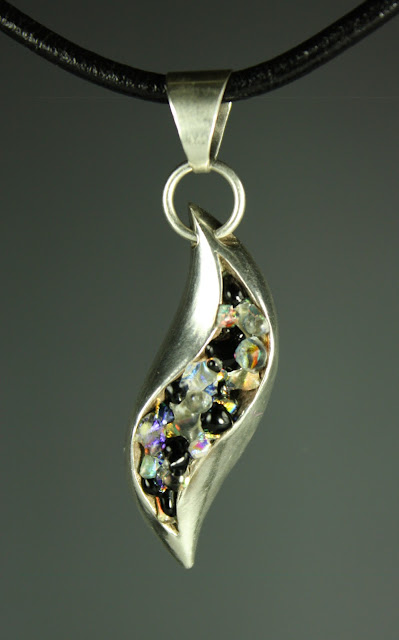 See more of Jen's work at Hidden in the Hills Studio Tour in Carefree Arizona November 16th, 17th, 18th and next weekend November 23rd, 24th, 25th.
Posted by LisaS at 3:26 PM No comments:

New at My Etsy Shop: 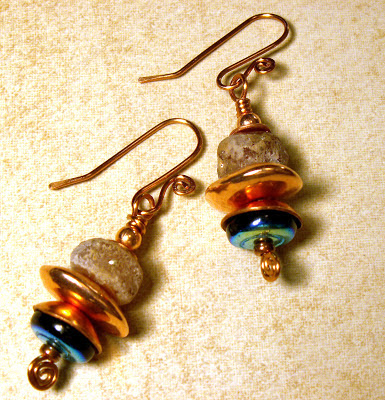 Click here for more information.
Posted by LisaS at 5:00 AM 3 comments:

Does Handmade Jewelry Stand the Test of Time?

Does your handmade artisan jewelry stand the test of time? Do you like jewelry made from top quality materials designed in a classic style meant to stand the test of time? Or, do you prefer to go with top trends of the season where gold filled clasps, colorful glass and even a little well made plastic is perfectly O.K.? Something to think about, but there definitely should be room for both in a personal jewelry collection, most people will say.

I often think about potential longevity when making my jewelry. And am glad I held on to a few pieces made early in my career. Here is a sterling silver necklace completed in the late 70's that I still like to wear sometimes today: 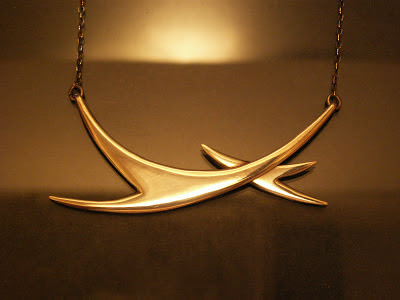 Simple clean lines can help a piece to be considered more classic in style. Perhaps for me, it is only a personal attachment. You can draw your own conclusions.

Second up is a bracelet I also made around the same time. This piece I love for the bezel work  though I have not found a reason to wear it for quite some time... 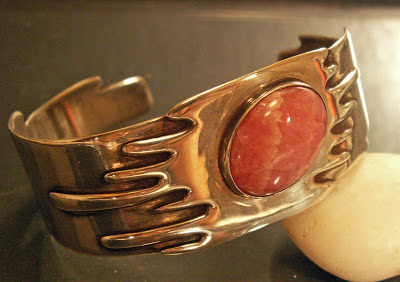 We were walking along a nature trail with our dog Buddy a while ago and met up with a British couple. The gentleman stopped to pet our dog and said "Well hello, look at you if it isn't Spit the dog".  Spit the dog?? Seeing that I was a bit confused, the man explained that Spit was a very popular dog who appeared on comedy shows in the U.K. He seemed very surprised that I had never heard of Spit before... 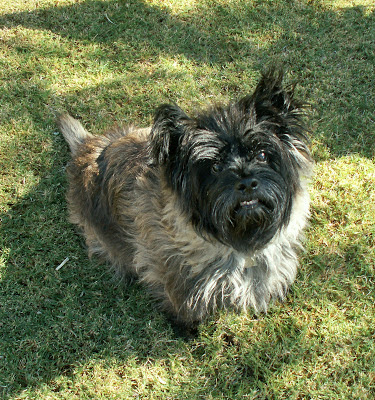 Buddy is a Cairn Terrier and though he was born in the U.S., I know that the breed originated on farms in the Scottish Highlands. There's nothing fancy about Cairn Terriers, they were originally kept to eliminate rats from the farmers' granaries. Buddy is true to his breed and loves to pick around rocks and holes looking for critters here, mainly lizards.

So I got to wondering if I could find any UTube videos of Spit the Dog to see if he reminded me of Buddy, and I have copied them here for you to see. Spit the mutt is a regular ringer, I have to laugh, Monty Python and Benny Hill move over:

If you are a beader who is still here with me and in a British humor,
enjoy the next challenge.
Just click here. 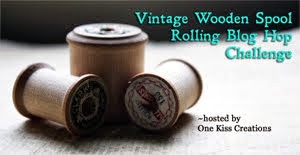 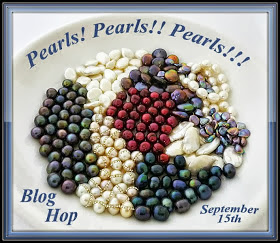 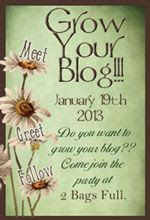 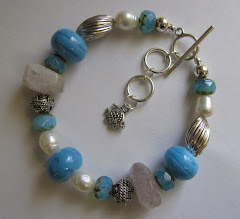